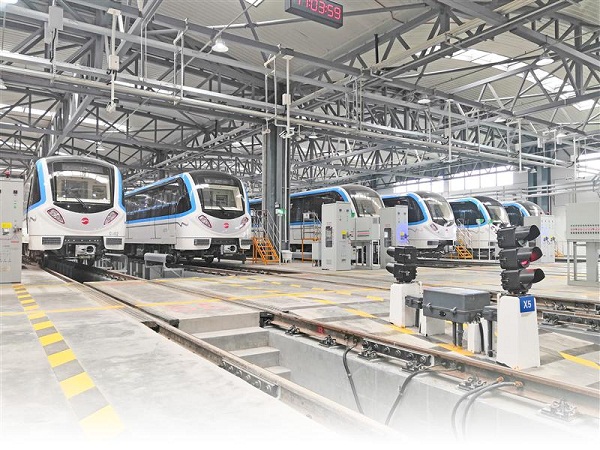 The trains for Wuxi's metro line 3 are colored white and blue. [Photo/wxrb.com]

The 28.5-kilometer line has 21 underground stations and runs from Sumiao Station in Huishan district to the Sunan Shuofang Airport Station in Xinwu district.

Passengers taking lines 1 and 2 are able to transfer to line 3 at the Wuxi Railway Station and Jinghai Station, respectively.

The trains for the line, colored white and blue, are more user-friendly than those of lines 1 and 2. New technology has made them smarter, safer, quieter, and more comfortable, according to officials.

A total of seven shuttle bus lines will connect to metro line 3 in Xinwu district, two of which opened the same day as the line.

The S789 shuttle bus, which started running on Aug 38, departs from the Wuxi Xinwu Railway Station and passes by Xinhua Road, Changjiang Road, Wudu Road, South Chengnan Road, Wangzhuang, and Gaolang Road. People working in industrial parks and living in residential areas along the route can board metro line 3 at five different stops.