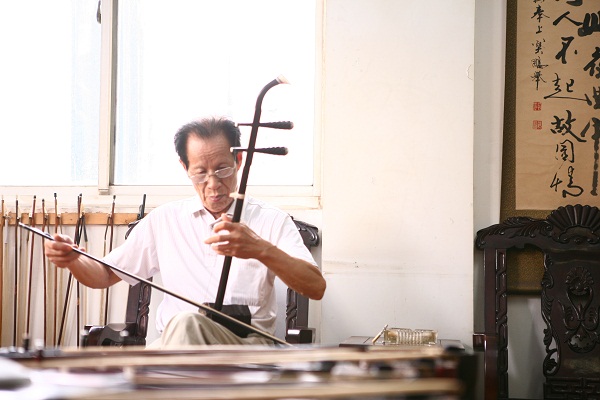 Ask any Chinese fan about the traditional two-stringed bowed instalment erhu and Moon Reflected on Second Spring will most likely be mentioned.

The piece was famously composed and played six decades ago by Ah Bing, a blind street musician whose real name was Hua Yanjun.

His hometown in Wuxi, East China's Jiangsu province, is known as a major production center of the instrument.

Erhu, one of the most representative traditional music instruments in the southern Yangtze River area, has a profound connection with Wuxi's Meicun town.

Meicun began producing the instrument in 1965. Led by master artisans such as Lu Linsheng, Wan Qixing and Wan Jugen, more people have since devoted themselves to the instrument.

An erhu guild has been set up, riding on the established "Meicun brand" that has grown to include at least 18 major groups producing more than 50,000 erhu annually.

The town has nurtured many craftsmen of the traditional instrument and continues to be a guardian of its musical form.

Wan Qixing is known for crafting the instrument, sometimes known in the Western world as the Chinese violin, for more than six decades, with a workshop in Meicun.

Wan, born in Meicun in 1938, founded the Guyue Erhu Workshop in 1991. In 2009, he won a gold medal at the "superior erhif competition organized by the Erhu Society of Chinese Musicians Association and clinched the top accolade of "master erhu maker".

A year later, he was invited to the inaugural "international treasure" ernu-making competition, winning two gold and three silver medals as an "international master erhu maker". Wan's creations have been known to fetch up to 180,000 yuan ($27,000) each.

Wan's son-in-law, Huang Jianhong, runs an erhu workshop in Wuxi and embarked on a radical move－using artificial leather to replace the snakeskin that covers the drumlike resonator－in an environmentally friendly attempt to update the craft that dates back more than 1,000 years.

Wan has described the exacting craftsmanship in making an erhu, centered on stretch－ing a pythons skin over the sound box. "This stage is crucial since it involves using the core techniques... by which the skill level of artisans can be judged," he said.