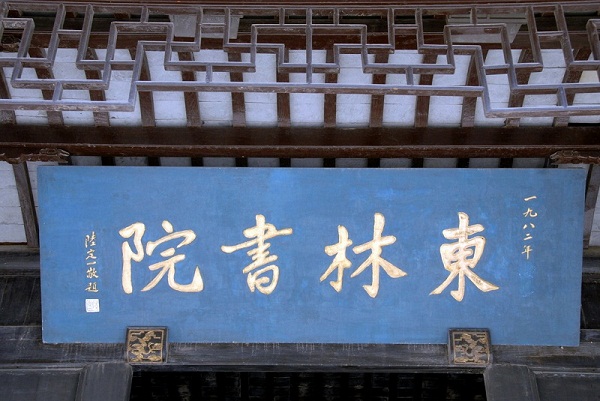 The nameplate of the Donglin Academy in Wuxi, Jiangsu province. [Photo provided to China Daily]

Many Chinese may not have heard of the Donglin Academy, but nearly all of them are familiar with the 17th century couplet that goes, "The sounds of the winds, rain and reading enter our ears and the affairs of the family, state and world draw our attention."

Gu and a group of other scholars repaired the storied academy in Wuxi, Jiangsu province, in 1604.

Founded in 1111, the academy was considered unique because it aimed for scholars to use their knowledge for the betterment of the nation. Some of the scholars' peers in similar establishments, who mainly recited ancient texts and lacked motivation to foster change in society, were thought to be too divorced from reality.

The couplet is located in Yiyong Hall at the academy－a sprawling site in downtown Wuxi that passes on neo-Confucian traditions.

With its charming stone memorial archway, the academy is among the city's most iconic landmarks, and in 2006, it was named a National Key Relics Conservation Unit by the State Council, China's Cabinet.