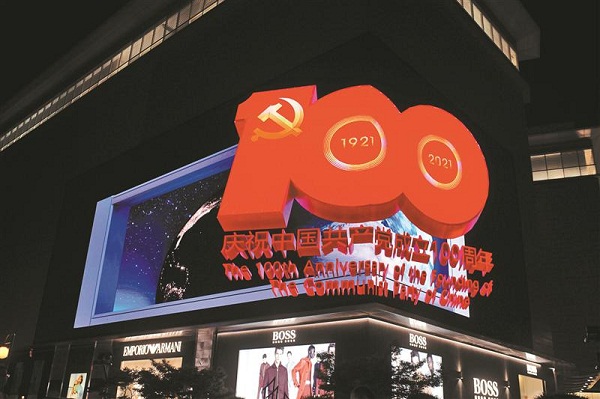 An image of the official logo for events to mark the 100th anniversary of the founding of the CPC pops out of the screen at the Yaohan Shopping Center on Zhongshan Road, Liangxi district. [Photo/wxrb.com]

Wuxi in East China's Jiangsu province lit up its high-rise buildings in the downtown area to pay tribute to the Communist Party of China and celebrate its 100th anniversary on June 30.

The revolution-themed light show will run for one month in downtown Wuxi every 7:30 pm, featuring numbers such as 1921, 2021, and the Party emblem and five-pointed star.

Visitors can watch a red-themed naked-eye 3D video on the outdoor wall of the Yaohan Shopping Center on Zhongshan Road, Liangxi district every day at 8:00 pm.

The video features a variety of important "boats" over the past century, including the red boat on Nanhu Lake in Jiaxing, Zhejiang, and China's latest manned submersible Fendouzhe, which was designed in Wuxi.