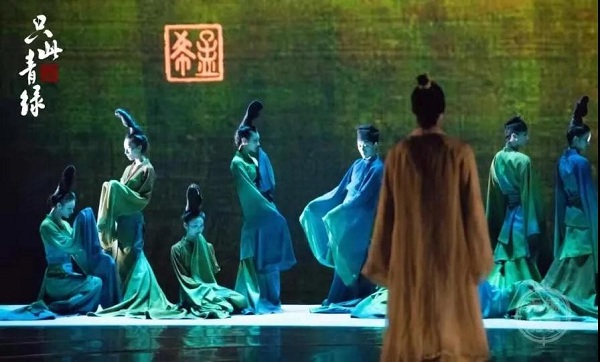 Dance drama "Zhi Ci Qing Lyu" will be staged in Wuxi on Nov 2 as an event of the 2021 Taihu Art Festival. [Photo/Wechat account: wuxifabu2013]

The 2021 Taihu Art Festival, a highly anticipated culture and art extravaganza, kicked off in Wuxi, Jiangsu province on Oct 25 and will run until Nov 30.

The first show of the art festival was held in the Opera Hall of the Wuxi Grand Theatre by the Hangzhou Philharmonic Orchestra, famous violinist Lu Siqing and tenor Xue Haoyin.

They brought audiences a grand symphony with various songs from home and abroad, expressed their love for the motherland and showcased a fusion of eastern and western cultures.

A number of performances will also be held in communities and commercial areas for free to promote art to more people.

The event is aimed at showcasing the cultural charm and artistic achievements of the city and boosting its nighttime economy, according to officials.

The 2021 Taihu Art Festival is hosted by the Wuxi government and organized by the Publicity Department of the CPC Wuxi Municipal Committee, the Binhu district government, the Wuxi Municipal Bureau of Culture and Tourism, and the Wuxi Federation of Literary and Art Circles.